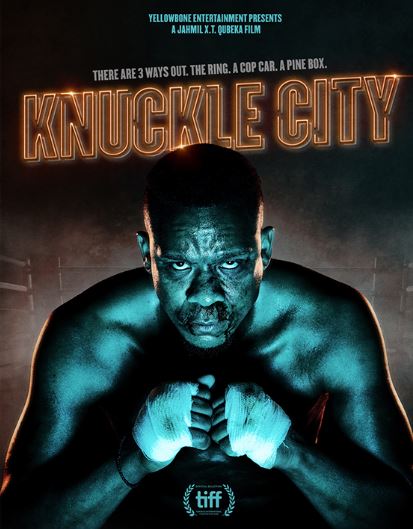 Knuckle City got a standing ovation at Joburg Film Festival

This week at the 2nd edition of the Joburg Film Festival in partnership with Multichoice Group was a Jahmil X.T. Qubeka’s Eastern Cape boxing tale called “Knuckle City”

The plot follows Dudu Nyakama played by Bongile Mantsai who is famously known for his role on Inxeba & Scandal. Dudu is a struggling boxer from Mdantsane and has his hopes on using boxing to come out of poverty. The cast also includes comedian Sivuyile Ngesi, Faniswa Yisa, Thembekile Komani, Owen Sejake, Patrick Ndlovu & Zolisa Xaluva.

When you hear the name Jahmil X.T Qubeka you also cannot help but to think about some of the most cinematic masterpieces that he has given us as a director like Of Good Report, Sew The Winter To My Skin and the latest offering Knuckle City which is being received positively across the world. It has a 100% rating review on Rotten Tomatoes to date and had a world premiere at Toronto International Film Festival as part of their contemporary world cinema program.

The cinema was full house in Sandton Ster-kinekor as lots of people came in numbers to experience this gripping yet heartbreaking story that focuses on the culture of boxing in the township. Mdantsane (East London) is well known for its deep rooted culture in boxing. The scene that got my attention was when Dudu & Duke’s father (portrayed by Zolisa Xaluva) gave them a piece of advice saying: “A man who neglects his family is not a real man.” The irony in all this was that the father was previously a world champion and most of the time never practiced what he preached, the boys grow up to take some of his traits as they grow up. Dudu became a womanizer and an old boxer who struggles to make ends meet, while Duke (portrayed by Thembekile Komani gets caught up in some criminal work and ends up in jail).

The film boasts with such great cinematography & performances. It does a great job challenging a prevalent problem affecting the township of Mdantsane and SA at large. This includes traditional notions of masculinity to reveal how toxic and destructive it can be. Bongile Mantsai’s screen presence is everything, he carries the movie in ways that a lead actor should and Thembekile also did a great job as Duke, who by the way is the only character that was auditioned for this film. Jahmil said during the Q & A’s, he already knew who he was going to work with from when he was still in the writing stages of this film. I loved the boxing fights and more especially ones with Siv Ngesi as Goatee, another great talented actor who I would like to see more on our big screens.

I was captivated by this film and its definitely my best movie I’ve seen this year. I loved the use of Xhosa with some of the most hilarious lines & mostly using vulgar language but then that is exactly how it is in the Eastern Cape particularly in Mdantsane.

Knuckle City is chosen as South Africa’s official Oscar submission for the 92nd Academy Awards. Thanks to everyone that made this film a possibility. From Director Jahmil X.T Qubeka, the producer and editor Layla Swart who did a fantastic job in post production and the cast and crew.